This week’s past lecture, we discussed deterrence theory and different methods and approaches to prevent crime. The focused deterrence model is the idea that the possibility of punishment for one’s actions prevents people from committing crimes. Personally I think this theory is only viable for certain circumstances. In certain places where law enforcement isn’t perceived as a threat, people may commit crimes without fear of being caught. When there is a lack of respect between the police and community members this circumstance is evident.

Growing up I was taught to trust those in charge like elders, teachers, police officers, firefighters, etc… As I got older, I saw how police treated some of my peers and I quickly lost that trust. They were supposed to aid the community in stopping crime, not point fingers at the first person they see wearing baggy jeans and a black hoodie. Between random stops on the street and arrests for simply “looking suspicious,” the police in my neighborhood were not considered friends amongst us. 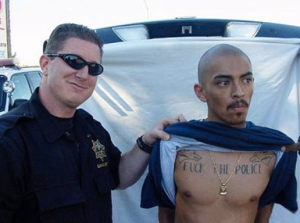 The first thing that comes to mind when I think of a lack of respect is NWA’s famous song “Fuck the Police.” Some lyrics include, “Fuck the police comin straight from the underground, a young nigga got it bad cause I’m brown, and not the other color so police think they have the authority to kill a minority.” NWA hails from Compton, CA, a place where the police targeted blacks heavily and when this song came out it wasn’t news to anyone because most people shared this sentiment. The song demonstrates the extreme disconnect in a place were the police were not protecting the citizens, which led them not to discredit their power and authority, rendering them useless.

A show recently aired on TNT entitled, “Boston’s Finest” about Boston’s Police Department. The show portrayed the cops capturing suspects, talking to youth, and their lives at home with their families. The bio on the TNT website says, “Boston’s Finest offers viewers an up-close and very personal look at what it takes to protect and serve one of America’s greatest and most distinctive cities.” While I thought there was some truth to the process in which they catch suspects, I think the show portrayed a false reality of the relations between the cops and youth in the city. Being a resident of Boston, I can say firsthand that there needs to be an improvement of the image of cops in the city. Boston has a similar structure to the “Governing Board” that Dean Dabney outlined in the lecture. However, not all systems have strong ties with one another, especially law enforcement. A study outlined some of the reasons why people lack faith in the police department including lack of confidence in police to solve issues, a risk of mistreatment, and a loss of respect from one’s peers (Anderson). Many people don’t trust cops because of personal experiences or seeing mistreatment happen to their peers. Clearly there needs to be change in the inner city so that the police and people in the community can trust one another. After seeing these shows and viewing this mistrust firsthand, I can say that it will take a lot of TLC to get everyone on one side and trusting the police to have our best interests.