In class we discussed violence against domestic animals. The relationship between humans and animals is determined by how the animal is categorized (companion animal, laboratory animal, livestock, or warm-blooded animal). Companion animals, such as dogs and cats, have a special relationship with humans and the most legal protection of the categories. It seems that protection isn’t because the animals themselves deserve protection but rather because of the human interest in the animal. Dogs in particular have a strong bond with humans. Being a dog lover myself I decided to delve into the relationship between canines and people.

Over time dogs developed an ability to communicate with humans. (http://www.ncbi.nlm.nih.gov/pmc/articles/PMC2251326/) A recent scientific study suggests that people might really be able to tell what a dog is feeling just by looking at his face. (http://www.telegraph.co.uk/lifestyle/pets/9934977/Scientists-prove-you-really-can-tell-what-your-dog-is-feeling-by-looking-at-its-face.html) The research included a group of 50 volunteers who were broken into 2 groups based on their experience with dogs. Each volunteer viewed various photographs the same dog and were asked to identify the dog’s emotion. Volunteers were able to accurately identify when the dog was happy, sad, angry, surprised or scared just by seeing a picture of the dog’s face. This ability to recognize emotions in a dog indicates that people are naturally able to detect how animals are feeling.

The volunteers most easily identified happiness (88%). The second most identifiable emotion was anger which was recognized by 70% of the volunteers. The remaining emotions and corresponding percent of recognition are frightened 45%, sadness 37%, surprise 20%, and disgust 13%. (http://www.telegraph.co.uk/lifestyle/pets/9934977/Scientists-prove-you-really-can-tell-what-your-dog-is-feeling-by-looking-at-its-face.html) Interestingly, the study showed that the volunteers who had minimal experience with dogs were better able to identify disgust and anger. The researchers think that the inexperienced volunteers could recognize the emotion of the dog because the ability to read a dog’s face comes naturally and isn’t a learned skill. It is unclear why this is the case but the researchers hypothesize that this ability might be due to the long shared history or common mammalian ancestry. Facial expressions of dogs are similar to human facial expressions. Overall the experienced volunteers could correctly identify the dog’s emotion 45% of the time and the inexperienced group was correct 38% of the time. (Bloom, T., Friedman, H., Classifying dogs’ (Canis familiaris) facial expressions from photographs. Behav. Process. (2013), http://dx.doi.org/10.1016/j.beproc.2013.02.010).

Dogs are man’s best friend. They are loyal companions who grieve the loss of their friends too. Not too long ago my mom and I watched the movie Hachi: A Dog’s Tale starring Richard Gere. Neither of us can even talk about the movie without crying. The movie is based on the true story of a University of Tokyo professor and his furry companion Hachiko from the 1920s. Richard Gere plays a professor who takes the train to work everyday. One night coming home he comes across an Akita puppy all alone in the cold at the train station. He takes the dog home and they instantly bond. Every morning Hachi escorts the professor to the train station and every afternoon he meets the professor to walk him home. Spoiler Alert! Years later the professor takes the train to school but something horrible happens and he never returns. Hachi waited for his return. It never came. The professor’s family took Hachi home but they couldn’t keep him there. Hachi escaped to return to the train station to wait for his friend; he continued to wait until his death 9 years later. 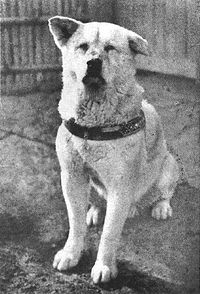 Recently another episode of canine loyalty surfaced in the media. In 2006, similar to Hachi’s devotion, German Shepherd Capitan ran away from home after his friend Miguel Guzman died suddenly and found his grave. The family found Capitan at the grave the following week. For the past 6 years every evening Capitan returns to the cemetery and spends the night on his best friend’s grave.

A third loyal companion is Ciccio (or Tommy), a German Shepherd from Italy. Prior to her companion’s death,  each afternoon Ciccio would accompany her friend to mass. Ciccio attended the funeral and followed the procession of the coffin to the same local church where the 2 had attended mass.

Many owners reciprocate this loyalty. There are many people who have dogs and lovingly care for them because the dog is a member of the family. People are so attached to their pets that Congress passed a law allowing pets to stay in shelters with their families during federal emergencies. (Animals as Vulnerable Subjects: Beyond Interest-Convergence, Hierarchy, and Property by Ani B. Satz 2009, 67, 83) Some people were killed during Hurricane Katrina when they refused to leave their homes without their animals. (Satz, 67, 83)

However, while dog is man’s best friend, people do not always hold up their end of the friendship. Many other dogs aren’t so lucky and suffer abuse and neglect at the hands of people whether it be through action or failure to act. Many animals are sentient beings meaning they have the capacity to suffer. (Satz, 73-77) Domestic animals are particularly vulnerable to exploitation because they are permanently dependent on human caregivers. (Satz, 81) At a minimum, domestic animals are dependent on their caregivers for food, water, and shelter and at the mercy of others.

There is so much neglect, that states have criminalized companion animal abuse and neglect. (Satz, 81) Companion animals are domesticated live as a pet such as dogs, cats, birds, rabbits, and horses. Some purposes of these laws include a desire to keep them from harm, protect the relationships people value with their pets, and the link between animal cruelty and violence against humans. (Satz, 67-73)

For example, Georgia defines cruelty to animals: “when he or she causes death or unjustifiable physical pain or suffering to any animal by an act or omission, or willful neglect.” Ga. Code Ann. § 16-12-4. The term animal does not include fish or pests and willful neglect is intentional withholding of food and water necessary to prevent starvation or dehydration. In Georgia, “a person commits the offense of aggravated cruelty to animals when he or she knowingly and maliciously causes death or serious physical harm to an animal by rendering a part of such animal’s body useless or by seriously disfiguring such animal.” Ga. Code Ann. § 16-12-4.

You’d think that because people can decipher a dog’s emotion by his or her facial expressions and how loyal dogs have proven to be to their human counterparts there would be less mistreatment of dogs. Unfortunately that doesn’t seem to be the case. If you are interested in volunteering and helping homeless dogs and cats in your community check out Georgia Homeless Pets http://www.gahomelesspets.com/ and/or Homeless Pets Foundation http://www.homelesspets.com/. I have volunteered with both organizations and they need all the help they can get!

Information provided by the cited materials above and the links listed below.